“Jurassic World: Dominion” places more animatronic dinosaurs alongside CG creatures than any other film in the franchise. This was more than a nostalgic nod to late practical wiz Stan Winston, who worked on the first three “Jurassic Park” films: It was also a strategy to capture as much in-camera interaction as possible between the actors and creatures (shot in 35mm and 65mm by cinematographer John Schwartzman). The results are striking and seamless, thanks to state-of-the art animatronics and animation, as well as closer collaboration between creature effects, visual effects, and SFX.

The creature team worked with 14 different species and 48 total builds, but the greatest emphasis was on the newest baddie, the Giganotosaurus — the franchise’s largest carnivore and an actual dino, not a gene-spliced hybrid. According to creature FX supervisor John Nolan, director Colin Trevorrow wanted battle scars running down the Giganotosaurus’ face, approximating the look of Jack Nicholson’s Joker makeup in Tim Burton’s “Batman.”

“With Giga, it was always going to be a 3D creature and ILM made it first,” Nolan told IndieWire. But later in production, Trevorrow wanted a practical creature on set — one that would enhance the realism and wouldn’t have to be replaced in post.

“We went to ILM and looked at their computer model, and we printed one out about a meter long to study the head and neck,” Nolan said. “And then we worked out how to build the much larger one working from the same file. VFX could then extend it in post.

“I do firmly believe that it lends something to the actual emotional connection that you have with the performance that you’re seeing because of the way the actors have something to react to,” added ILM production VFX supervisor David Vickers told IndieWire. “And that’s why the animatronics play so well. It’s a dynamic interaction.” 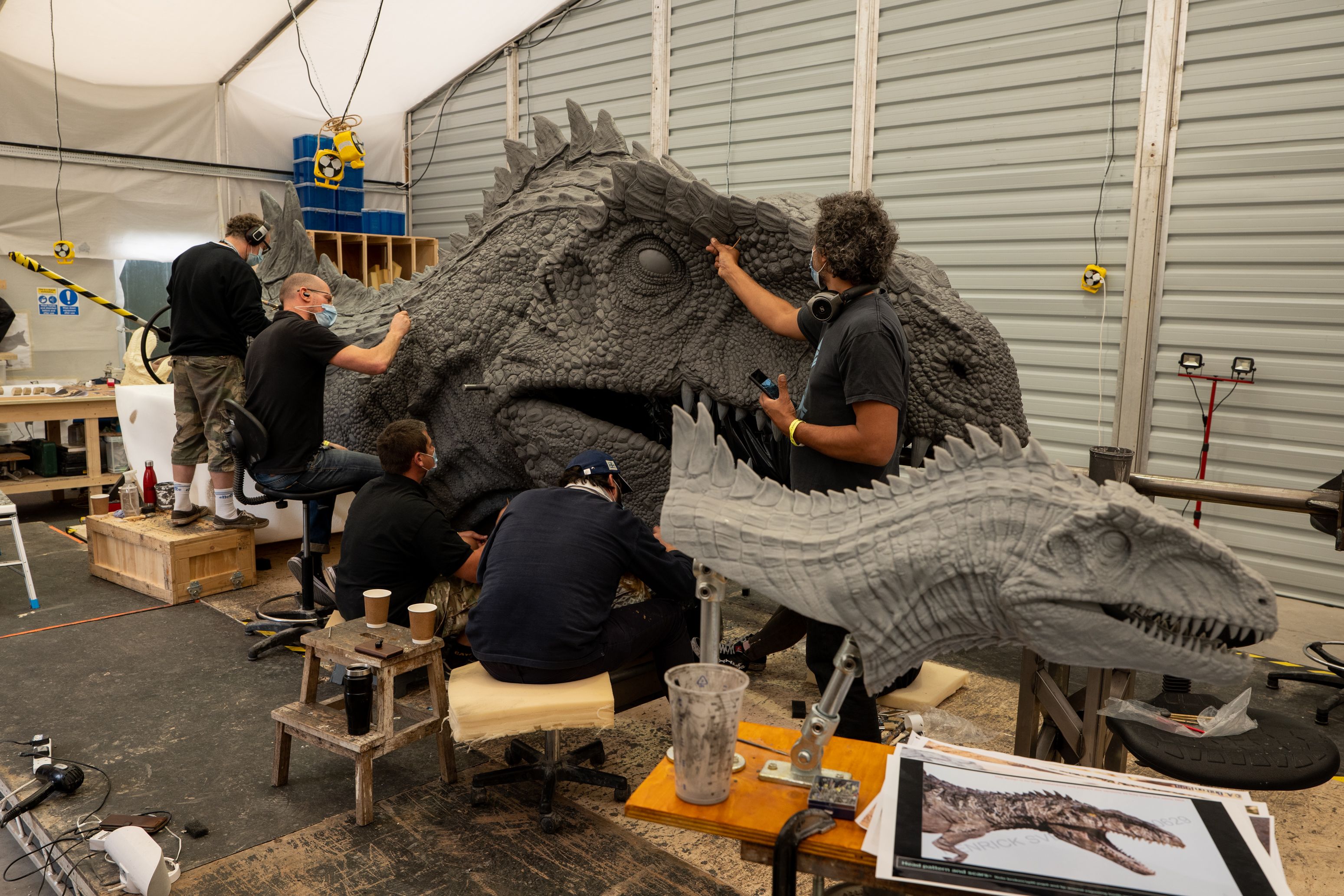 Nolan’s team had computer-controlled machines that could actually carve from polystyrene foam to the large scale size. There was a team of 16 sculptors that provided the detail on top of the polystyrene. “Then we did the skinning with fine latex 10 centimeters thick, and baked the whole skin in an oven, and then washed it so it wouldn’t tear,” Nolan said.

The practical rig was 20 meters long and weighed nine tons and took six hours to move from one set to another, de-rigging and re-rigging over night. A much smaller version was made for production meetings. This was provided to VFX and SFX (supervised by Paul Corbould). Nolan’s team created the animatronic head (which was the size of a car) and mouth, while the neck and the body were made by SFX with the use of hydraulics.

Meanwhile, for ILM — which created a mere 70 CG dino shots in “Jurassic Park,” compared to 900 in “Dominion” — the Giga represents the franchise’s greatest achievement in terms of look and performance. “The challenge for us was trying to work out how we could stop people from thinking what is animatronic and what is digital,” Vickers said. “So we were careful in where we used them, and how we [switched back and forth] as well. It put a huge amount of rigging onto the set, which we then had to paint out in post, but it gave that heightened sense of emotion to the filmmakers and the cast. We wanted to serve Colin’s style of filmmaking in an honest way.”

It was up to the animation team to find a personality for Giga in the way it moved and behaved. For supervisor Rubinchik, that meant animal behavior and instinct. “There’s a moment when he’s distracted by locusts flying in the air,” he said. The Joker analogy inspired the dinosaur’s lumbering movement, which the animatronics fed into.

The animatronic Giga appears most prominently after the jeep rolls down a hill and lands in the third act. The first shot where it appears is digital, followed by a practical head and digital extension of the body. This alternates back and forth until a fully CG shot, and it then cuts seamlessly from digital to practical all the way through that. 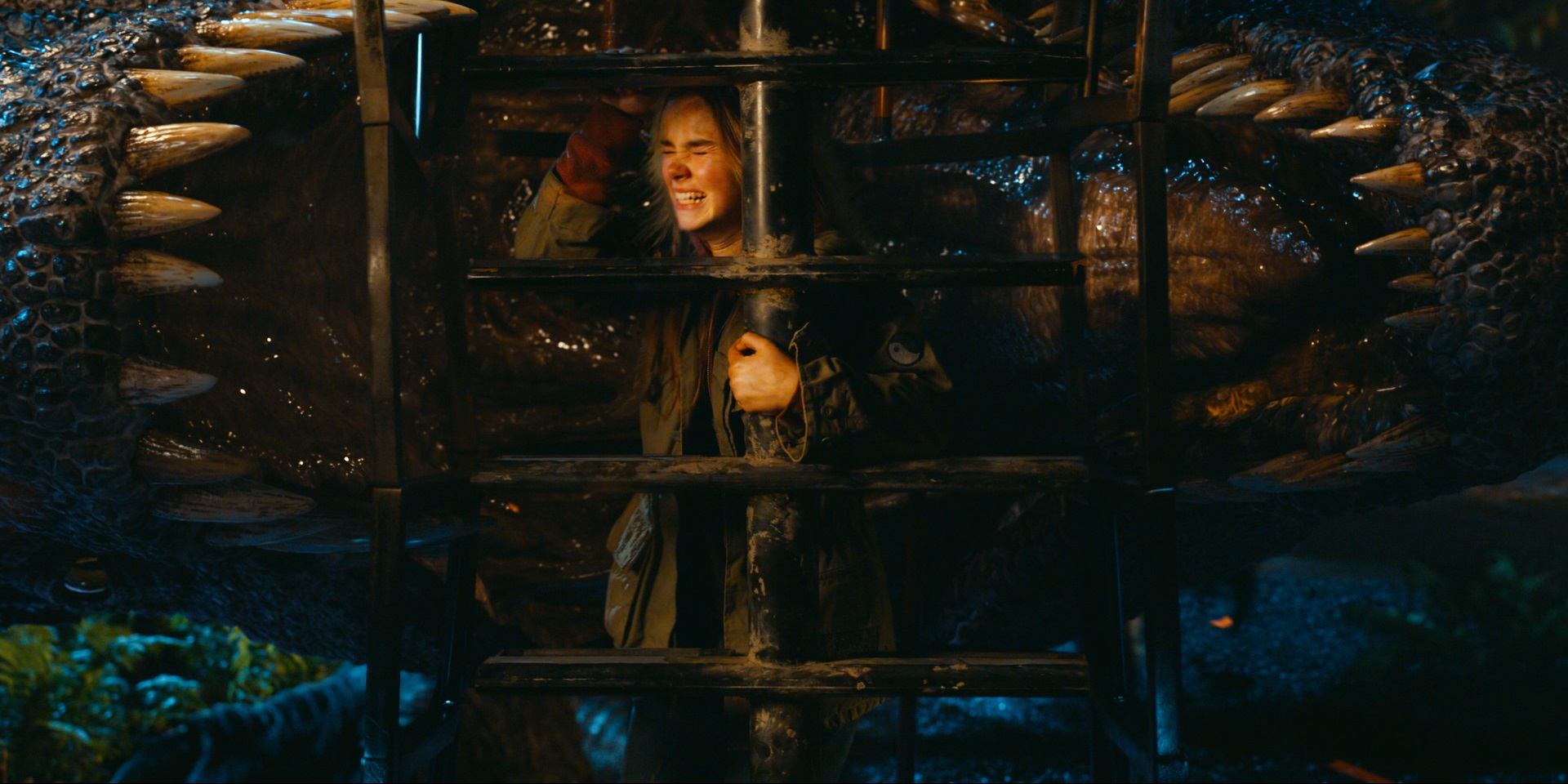 Inevitably, though, there’s the climactic battle between the Giga and the franchise’s beloved T-Rex (all CG), who’s been restored to her former glory after ILM unearthed the original model from “Jurassic Park” and not only matched it but also upgraded it. “We called it digital archaeology and studied the subtle differences to the shape of the head, line of the brow, nose ridges, and body shapes, too,” Vickers said. “We put them back so now we have our latest high-res T-Rex with all of the detail that we need to fit back to the shape of the Stan Winson model. We did the same with the textures and matched it back, including the dark eye socket that slowly faded out.”

According to a prologue that was cut from the theatrical release but is available online, this battle is actually a rematch between the underdog T-Rex and superior Giga, which first took place 65 million years ago (the T-Rex is a clone of the original that lost the battle). “We were tasked with this big, almost 360-degree spin around the BioSyn courtyard, where they’re fighting,” Rubinchik said. “At one point, it was one long, unedited shot. It was tricky getting these dinosaurs to fit in the space, running and dodging, and spinning around [with Proof doing previs and postvis].”

But history repeats itself with the Giga overpowering and apparently killing the T-Rex. “One of the fun things was how brutal we got to be with Giga and he was throwing T-Rex around and grabbing her by the neck and slamming her to the ground and stomping on her head,” added Rubinchik. “Colin kept wanting to push it.”

But then the feathered Therizinosauru arrives to take on the Giga (necessitating new feather sim curve tech from ILM). After a miraculous recovery, the T-Rex rises from the dead and provides enough assistance for the challenger to kill the Giga by stabbing it through the neck. “The moment when she dies and gets thrown down on the slab is like Aslan in ‘The Lion, the Witch, and the Wardrobe,’ added Vickers. “The queen is being killed, but she wakes up again, which is fantastic.”

Seth Rogen’s Ninja Turtles Movie Has A Title: Are You Ready For Mutant Mayhem?

John Leguizamo Has “No Problems With James Franco” But “Appropriating Our Stories — No More Of That”; ‘Alina Of Cuba’ Producer Defends Casting

Jason Blum Ready to Move on from ‘Paranormal Activity’: ‘That Last Movie Was Terrible’

Seth Rogen’s Ninja Turtles Movie Has A Title: Are You Ready For Mutant Mayhem?

John Leguizamo Has “No Problems With James Franco” But “Appropriating Our Stories — No More Of That”; ‘Alina Of Cuba’ Producer Defends Casting

Jason Blum Ready to Move on from ‘Paranormal Activity’: ‘That Last Movie Was Terrible’

Martin Sheen Regrets Changing Name, Wishes He Had the ‘Courage’ to Go by Ramon Estévez

‘Community’ Stars Insist ‘Legitimate Conversations’ About a Movie Are Happening

Mike Tyson Slams Hulu Over ‘Mike’ Series: ‘They Stole My Life Story and Didn’t Pay Me’

Here’s Why ‘Top Gun: Maverick’ Is Bigger Than ‘Titanic’: It Saved the Movies

The 10 Best Chris Evans Movies of All Time – Reso